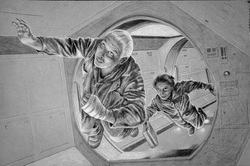 David came convulsively awake, adrenaline bursting through him as the raucous blaring of the Master Alarm shattered the silence. The lights flickered, and the rotating amber of the alarm indicators turned the cabin into a chaos of shadow and fire. David wrenched at his sleeping belt and lunged for the door. The ship lurched, and his head hammered into the bulkhead. Ears ringing, he hauled himself into the corridor. The ship stopped shaking, but the lights continued to wax and wane at half their usual intensity. As he dragged himself toward the cockpit, the other cabin burst open to reveal a half-dressed and disheveled Dr. Porter, naked terror in her eyes. David ignored her, pulling himself forward hand over hand. He wrenched the door open to find the cockpit empty, its darkness punctuated by a flickering aurora of emergency warning lights, flashing urgently in myriad colors.
“What’s happening?” Porter screamed. Her eyes were wide and white, and her hands shook.
David gritted his teeth. In a crisis in space, a panicker was worse than a corpse.
“Christ knows!” he yelled back. “Some kind of power failure. Any sign of Ellen or Beaume?”
She displayed enough self-control to shake her head, at least.
David wormed his way into the cockpit and plucked up an emergency headset. Its power lights remained dark. “Damn it! Communications are down. Get back into your cabin and stay out of my way!” He shouldered Porter aside and thrust himself along the main companionway toward the engineering spaces. At the first connecting hatch, he looked back. Porter clung to the cockpit door, transfixed by the play of warning lights across the control panels.
“Porter! Move your ass, damn it!” he shouted.
Shocked out of her inaction, she moved, fumbling clumsily along the companionway toward the sleeping quarters.
As David thumped to a halt against the engineering hatch, a fire claxon burst out, fast and insistent, louder even than the Master Alarm, the sound every spacer feared above all others. Nerves keyed to fever pitch, he seized a fire mask from the wall and pulled it over his head, then grabbed an extinguisher and opened the hatch.
Banks of hulking battery cells stood in rows, electrical relays and monitoring equipment sandwiched alongside. At the far end of the compartment, from between two batteries, fire poured out into the central walkway. Unconstrained by gravity, it dipped and whirled, spreading and splashing outward like a liquid, bright oranges fading to blue. And over the banshee screeching of the alarms, a more primal sound issued: the scream of a human being in agony and terror.
David thrust himself forward, arrowing along the central walkway with the extinguisher held out. A quick burst of carbon dioxide dashed away the drifting droplets of flame, and he thudded home against the side of one of the batteries. He sucked in a deep breath and pushed off for the center of the fire, spraying the extinguisher indiscriminately before him. He hammered into something solid, and felt choking heat below him. A globule of liquid fire splashed onto his hand, and he roared in pain.
Another extinguisher opened up, bathing him in white clouds of CO2, and the heat subsided. David spotted Porter anchored a few yards from him, extinguisher in hand and a mask over her face.
Over the blaring of the alarms, he shouted to be heard. “Porter! The fire’s out! Just inside the hatch there’s an emergency venting control—a red handle. I can’t see a damn thing in here.”
She nodded and dragged herself away. More use than a corpse, at least. David pulled himself down to the deck. Billowing clouds of gas masked everything, forcing him to search by touch, not knowing what he might find. The screaming had stopped. A sudden howl announced
the activation of the emergency venting fans--thank God they’ve got a stand-alone power supply—and the clouds whirled away up to
the extraction port in the ceiling. After a few moments, the room cleared enough for him to see again.
“Porter! Get over here! We’ve got people down!”